On September 15th, The White House and U.S. Department of Labor held the final and only southern Worker Voice Summit in the offices of Workers Defense Project.

In October 2015, the White House convened the first Worker Voice Summit to start a conversation about the relationship between worker voice and a thriving middle class. At the end of the day, President Obama challenged us to keep the conversation going across the country to highlight the innovative ways middle-class Americans are sharing in the broad-based economic growth that they’re helping to create.

Since then, the Department of Labor has hosted a number of regional summits around the country. Last week, in Austin, Texas, the Department of Labor partnered with the Workers Defense Project (Proyecto Defensa Laboral) to bring together key stakeholders from across the South – organizers, workers, unions, businesses and advocates – for a discussion about what is working, what still needs to change and the role that workers play in the conversation. I was honored to give the keynote address. 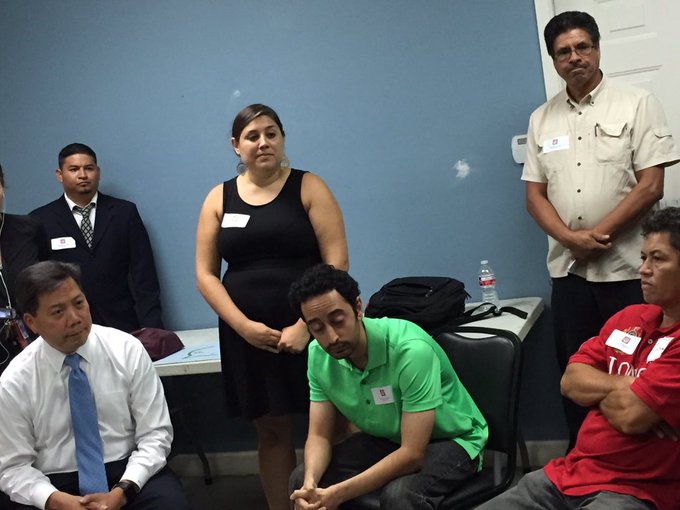 José Garza, the executive director of the Workers Defense Project, described how their Better Builder Program is collaborating with developers to require higher wages and safety standards for workers on their construction projects in Texas and the South. Recently, the Austin City Council voted to require Better Builder standards for contractors seeking expedited building permits. Austin Council Member Greg Casar also spoke about this big win and the important protections and benefits it will provide for working people in the community.

The summit also featured a panel of key voices from the region: Cynthia Hernandez from the South Florida AFL-CIO Central Labor Council, Jessica Malcom with Georgia STAND-UP, Jackie Cornejo from the Partnership for Working Families and Wendy Nutt from MGM Resorts International.

During the summit, I had the opportunity to speak with Dallas construction workers and Houston janitors, including Reina Oliva. Reina is a mother of two who fled poverty and domestic abuse in Honduras years ago. Now she’s a leader in SEIU Texas, where she works tirelessly to organize her fellow janitors in Houston to fight for better wages and working conditions.

Another individual I met is Justin Hyatt, a high road employer who started his business in Austin five years ago. He provides living wages, safety training and workers’ compensation to his workers even though none of this is required by state law. It costs him a little more, but Justin credits his business’ success to these practices, which attract better workers and produce a better product.

Throughout the day, I was proud to see many of the Department of Labor’s regional staff at the event. Our Occupational Safety and Health Administration and our Wage and Hour Division work closely with community organizations in Texas on enforcement, engagement and education. The partnerships they are forming are critical, especially in areas with large immigrant populations and where state-level enforcement mechanisms are limited.

As the one-year anniversary of the first White House Worker Voice Summit approaches, we are reflecting on the great work that our partners across the country have done to give workers a voice on the job. We know there’s a lot more to do, but with the continued commitment of workers, unions, employers and other partners, we know it can be done.

Now we want to hear from you: #StartTheConvo in your workplace today and share your worker voice story with us here.

Chris Lu is the deputy secretary of labor.